In general, prosthetic hands are manufactured for each user with a doctor’s diagnosis and measurements by a prosthetist. Even after manufacturing, it takes about a few months to train to perform basic operations and motions in daily life. In addition, the name and shape of the prosthesis are completely different depending on the cut part.

People who amputated hand or finger joints, use prosthetic hands. Many decorative artificial hands made of silicon are widely sold.

For amputations between your elbow and wrist, forearm prosthesis are used by fitting your arm into a personalized socket.

Forearm prostheses are used for those who amputated at the elbow joint. As the same as forearm prosthesis, they are used by fitting into the socket. In the case of an operable prosthesis, its forearm part and its hand unit are connected to user’s elbow joint, and the harness attached to the shoulder is used to perform operations such as bending and stretching the elbow.

If you have an amputation between your shoulder and elbow, ypu would use an upper arm prosthesis. It is used in the same way as an elbow prosthesis, and the part under elbow is operated from a harness.

People who amputated at shoulder joint or scapulothoracic joint should use shoulder prostheses. Many of them are fixed to the body with a belt, and operable ones have a shoulder joint built into user’s shoulder, in addition to an elbow joint, so that it can move.

Special instruments are attached to its tip to make it easier to perform specific tasks. Therefore, they look different from a human arm.

It is a prosthetic hand that reproduces movements such as opening and closing of elbows and hands by a harness attached to user’s shoulders and body. It is capable of movements with both hands, but there are problems such as requiring time for practice, weak grip strength, and its looks different from a human arm.

It is a prosthetic hand for the purpose of reproducing the appearance of the arm. Since the prosthesis itself cannot be moved, movements in daily life will be performed using the opposite arm.

It is a prosthetic hand that reproduces movements of hand by reading the myoelectric potential signal, which is an electrical signal generated when a muscle contracts, and driving the motor built into the hand unit.
Since myoelectric prosthetic hand does not require to attach or operate a harness, not like a work prosthetic hand, it has a strong gripping force and practicality. It has rapidly become popular in recent years because it can reproduce the appearance and movement of a human arm.
Various companies are developing it, and many models are appearing which integrate cutting-edge technology and have devised designs. 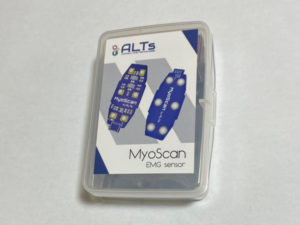